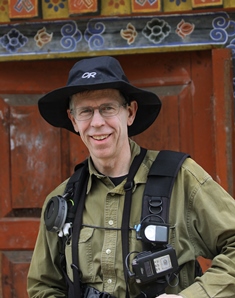 Tom has been birding since he was a kid under the tutelage of Dr. Arthur Allen of Cornell University. His articles and photographs are in museums and many publications including Birding, Birdwatcher’s Digest, Handbook of the Birds and Handbook of the Mammals of the World, and Guide to the Birds of SE Brazil.

He has lectured and guided many groups across the US as well as in Asia, where he trained guides for the government of Bhutan. He has donated many recordings of African and Eastern Himalayan rarities and other species to Cornell’s Macaulay Library of Natural sounds.

He was on Zeiss’s digiscoping team for the World Series of Birding and in 2011 his team won the World Series Cape Island Cup. Tom and team also hold the US record for a Photo Big Day, capturing 208 species on camera in a 24-hour period.

As a musician he played concerts and did studio work for many years, working with several Grammy and Academy Award winners as well as performing with members of the NY Philharmonic and the Philadelphia Orchestra. His clients included the Grateful Dead, Phil Collins and the FBI. He joined Roland Corporation in 1991, managed the recorder division, and retired recently as Director of Technology.

His latest book, The Warbler Guide, is published by Princeton University Press and recently won the National Outdoor Book Award. The Warbler Guide App won the 2015 Design Award for AAUP Book, Jacket and Journal Show. His new app, BirdGenie, a “shazam” for bird song is available since 2015. Tom is endorsed by Zeiss Sports Optics.

To learn more about Tom, go to thewarblerguide.com/contributors

"We have attended several birding festivals in previous years, and we have taken three Road Scholar trips specifically for birding. This festival was the most fun overall that we have attended. It truly did feel like a family reunion--without the obnoxious relatives!" - First Time Visitor

Cranberry Original goes old school! Take a big bus with up to twenty participants to an incredible spot for discovering plants and wildlife, stop for dinner in the old lumber town of Richwood, WV and return as late as 7:30pm.

Be in the know with our monthly email.
We do not share our email list with anyone. Ever.

Click here to view our bulletin archive, for this Festival year.