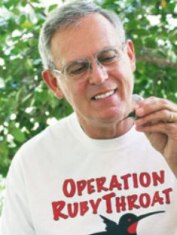 Bill’s job allows him to do all day what he likes best, so his vocational activities are almost indistinguishable from his hobbies.

Among Hilton’s awards are: South Carolina Science Teacher of the Year, and SC’s Outstanding Biology Teacher; one of “50 Best Brains in Science” in the December 2008 issue of Discover magazine; Carolinas Guardian of the Environment; the Outstanding Alumnus, Alumni Ring, and Luceo Mea Luce Awards from Newberry College; and the Prize for Excellence from Yamagata University in Japan in an international competition for projects involving “Nature and Human Symbiosis.”

Hilton’s formal education consists of a BA in Philosophy from Newberry College, Master of Arts in Teaching (MAT) in Biology from Winthrop University, and an M.S. in Ecology & Behavioral Biology from the University of Minnesota. Newberry awarded him an honorary doctorate for a lifetime of accomplishments as an educator and naturalist.

Hilton has studied extensively and trained students, teachers, biologists, and “citizen scientists” in the U.S. and six other countries. Hilton continues his work as an educator through lectures and workshops; as a consultant in science curriculum design and implementation and in outdoor learning; and as a widely published author on nature and education.

In 1999 Hilton launched “Operation Ruby Throat: The Hummingbird Project,” a cross-disciplinary initiative that builds international collaboration among students and teachers. An active field researcher, Hilton is authorized to capture wild birds and has banded and released more than 6,000 Ruby-throated Hummingbirds at Hilton Pond Center for Piedmont Natural History, a non-profit research, education, and conservation organization. Since 2005, Hilton has led 30 field expeditions into Central America to band and observe ruby-throats on their wintering grounds in the Neotropics.

To learn more about Bill and his work as an educator-naturalist, go to rubythroat.org and hiltonpond.org and "Like" his Facebook pages facebook.com/HiltonPond for timely updates on nature topics,
and facebook.com/rubythroats for info about hummingbirds.
Follow him on Twitter @hiltonpond